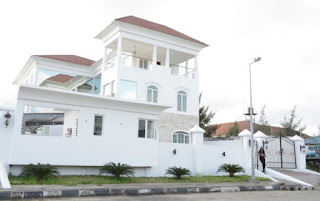 Yesterday, Linda Ikeji posted pictures of her new house in Banana Island, Ikoyi, Lagos. She said she bought it for over half a billion Naira. I was among the people that shared the link not necessarily because I was very impressed with the house (and I was pretty much) but because of the inspirational message she added below the pics. I was really inspired and motivated by her message to young girls to believe in God and themselves, not look unto a man to save them from poverty, to be consistent in whatever they are doing. Her statements that struck me most were "you're more powerful than you think" and "when God wants to bless you, he will bless you, even if you're selling toothpick". 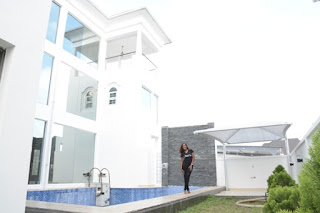 Now my advice to the millions that saw her post and have since been making calculations, planning on a change of career or have been depressed thinking they are failures because a 35 yr old female could achieve this and they are 40 just managing to pay rent.

1. We have different assignments and different callings in life. God will judge you based on the fulfillment of the very calling he assigned to you and not because you appeared on Forbes' list.

2. It is God that gives power to make wealth. Don't be fooled thinking because Linda says she stays up late nights and is up blogging while many are still sleeping, that hardwork and only hardwork is the key to success. God blesses whom he wants to bless. He makes conditions favourable for your success. You can't get favour by hardwork. You can't even get life changing opportunities by hardwork. They say success is when opportunity meets preparation. So your business is to be prepared (hardwork) and leave the rest to God. He lifts people in his time.

3. We have different pathways even to our diverse destinies. For fellow bloggers, don't think because Linda says her breakthrough in blogging began about 5 yrs ago and she's been blogging for almost 9 yrs, that it will take you the same number of years to start making it big. It may take you less or more. When she started blogging her goal was not to make so much money as to buy a mansion in Banana Island. So that should not be your goal either.

4. Consistency. She mentioned that in her post. I like to say that success doesn't happen over night. Consistency is what gets you there and if you're not passionate about what you do, how can you be consistent? That's why for people thinking on starting blogs because of yesterday's news, think twice. The road to success could be a long boring difficult road. Only the passionate make it to their destination. Remember, it is not necessarily about what you set out to do but about what you're willing to go through (hardwork), your consistency (which is a factor of passion) and God who decides what he wants to do with your life "even if you're selling toothpick".

You may not be on Forbes list, or buy a mansion but you may put many on Forbes list and in heaven, you get your reward based on what you were called to do, not what men celebrated you for.

See you at the top.

Email ThisBlogThis!Share to TwitterShare to FacebookShare to Pinterest
Labels: My Thoughts

Nice one Doc.... Well my colleagues were busy showing and commenting on the pictures at work yesterday when it came live lindas blog.... I was basically not concerned not because i am envious (why should I) but because she had discovered what her assignment is and is sticking with the program.

Many people want fame, wealth and all that but are not disciplined enough to go through the program. A popular igbo passage says "if you tell a poor man what it takes to be rich, he would say he is no longer interested".

For me it's a call to understand what purpose is for each and every one of us! Linda might not be a gim gim christian but Godly principles bring blessings upon the doer!

Many have dreams but would fail to follow through their dreams because they feek no one is supporting them down the line. (so much to say on this!)

Nice thoughts Diogo. The farmer plants the seed but he does not know how that seed germinates and bears fruits. The farmer could only show forth the harvest and brag on what he thougth he did to make the seed bear fruit. Linda planted her seed but only God could bring that level of success from something as seemingly common as blogging. Remember also there are times and seasons. An idea whose time is ripe cannot be stopped.
There's really a lot to say. But my conclusion is this, one must locate one's field (God given area of interest or passion or calling), cultivate faithfulness (hardwork, integrity, honesty, consistency), and then, wait (for your time and season. Concerning Joseph, the bible said, until his time came, the word of God tried him. So one will also be tried during waiting. Thank you.

for me, life doesn't hv any formula(e).
we r all just gifted differently.
even d ability to work hard or stay consistent is a gift.
life is only difficult when u r living someone else's life.

In successland discipline, consistency and determination is very important.

Linda's story has been inspiring.

I was deeply moved by Linda's story. It got me inspired, seeing that according to her, at 30, she was still a broke single lady and in five years, her fortunes have hit the roof. I'm happy for her and proud of her achievements at her young age. But then, God is the one who gives someone the power to make wealth, that I believe. I hope she will now start reaching out in some practical ways to empower the dreams of other young women. She could be the reason some young woman's dream will hitch a ride unto success.

Good work as always @Chidocs! There are many angles from one can view the success story of Linda Ikeji, but in staying with your analysis above, Linda have carved for herself a unique niche in the blogging world. The take away for all of us is that, there are things the Best of the Best have always done differently than everyone else, this things transcends from there many different qualities and habits. Chidocs, you belong to this class of Best of the Best, and I also know very well that you've got this qualities in abundance, but I'll still go ahead to list them.
The Best of the Best knows that as long as there is still breath in them, and with opportunity to live another day, there is more for them to be, do & achieve: 1)They are extremely goal oriented, 2)they constantly expand their vision, 3)they surround themselves with positive supporters, 4)they are constantly taking action, 5)they are lifelong learners, 6)they serve others, 7)they work harder than anyone else, 8)they dont let failure stop them from taking action or trying something new, or repeating a process again untill they succeed, 9)they believe in God and in themselves and work toward a vision or mission, 10)they dont give up

I found her announcement amusing, but I decided to keep an open mind. In older days I would have felt stupefied by someone sinking such an astronomical sum into the purchase of a place to sleep, but I guess she bought it both as a status symbol and as a fulfillment of some childhood fantasy or the other. I'm happy for her though. Thanks for the useful lessons you managed to draw out of the story.

Positive Words... our perspective in life really matters and it determines what we will become, no matter what.
Thanks for sharing your thoughts on this.

I loved your Blog forThe Earth Day Quizzes For Planting trees, I'm going to Follow Your Post for my Gardening and planting trees on Earth day. You are an amazing nature loving Person.

I like viewing web sites which comprehend the price of delivering the excellent useful resource free of charge. I truly adored reading your posting. Thank you
https://www.realapks.com

You are a very persuasive writer. I can see this in your article. Nice Post. You have a way of writing compelling information that sparks much interest.

You are a very persuasive writer. Nice Post. You have a way of writing compelling information that sparks much interest. Nice post

Thanks guys. I appreciate all your comments