It keeps getting more interesting. I can't wait for Friday to come. I hope you've started making plans to be at Covenant Place this Friday. It's Democracy Day,  a public holiday. How better could you spend it. 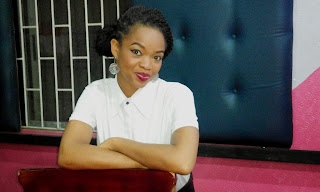 Make up by Face Mix World 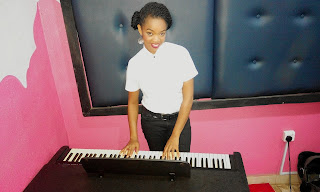 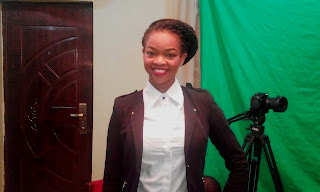 Come and see what the Nigeria of your dreams looks like.
CLOGS. From Snapshots Theatre
#newnaija 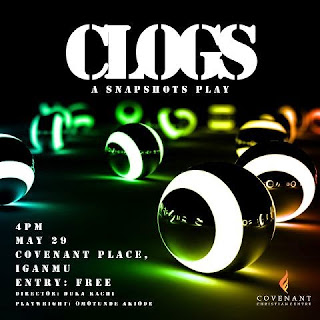 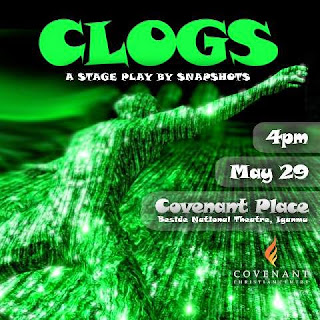 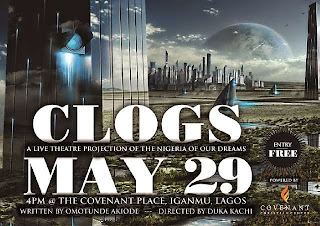 Bunmi was a fine girl— no doubt. What pissed people off was that she was aware of it. She'd walk into the room wide-eyed, scanning the room for rubberneckers with a sly smile on her heavily made up face. Everyone wondered why she still needed the make-up. She was perfect from a swimming pool. She was the perfect definition of a girl and indeed girly. She had all those fancy girly journals, wore pink shoes and carried teddy bear purses. Even her biros had them Barbie and Hannah Montanah on them. She never grew up.

I woke up today drenched in a pool of salt water, pitch darkness and mortal combat with some nasty stinging creatures. It's been one full week of power outage. Fuel is 300 Naira per liter and Naira is 350 to one dollar. The President had a heart attack yesterday and my dog collapsed. It seems I'm the only one at an equilibrium in the face of things.
- May 24, 2015 No comments:

It's always a rainy day here in Lagos. Gutters blocked, roads flooded, markets muddy, car splashes, damp clothes and stinking hair. This day isn't going to be different. And certainly not a day to meet my Mr. Right. I've always wanted to go to Abuja where everything is perfect. The Mr.s Right, the spotless roads, the money.  #factandfiction 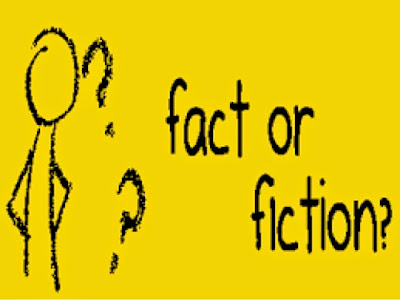 Hey guys. I'll be starting a series to just spice things up here in between my regular posts. I call it Fact and Fiction. The idea came from an online course I started recently. So this is how it goes. I'll write a paragraph of some things that are true and some things that are just made up. You point out which is fact and which is fiction. I hope you find it interesting.

It's amazing how weaknesses can be turned to strengths.
I was a 'cry cry' baby. I still remember growing up, some days I'd cry so much and then begin to beg for someone to console me. I'd say 'si mu ndo' meaning 'tell me sorry', after some minutes or hours of crying. I cried when scolded at. I cried when others cried. I cried when my siblings were being flogged. I cried when an actor in a film cried. I cried when I saw abject poverty on the screens. I cried when I was really happy. I cried at the sight of an athlete's victory. I couldn't help it. Tears just came out of my eyes so easily.
So I joined Snapshots, my church's drama ministry. I never believed I could act. I only knew I could cry. But somehow, with constant rehearsals and their faith in me, I now actually think I'd make a good actress. Here are some pictures of me doing what I know how to do best. 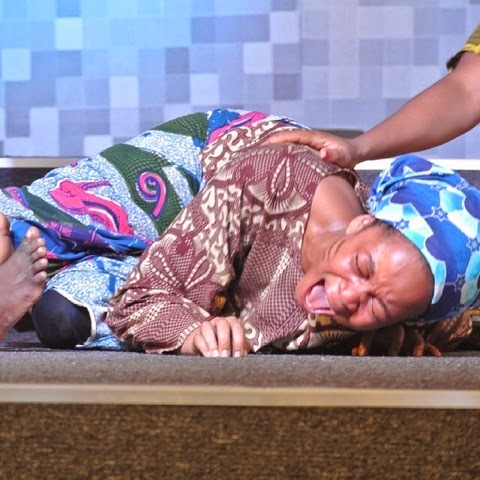 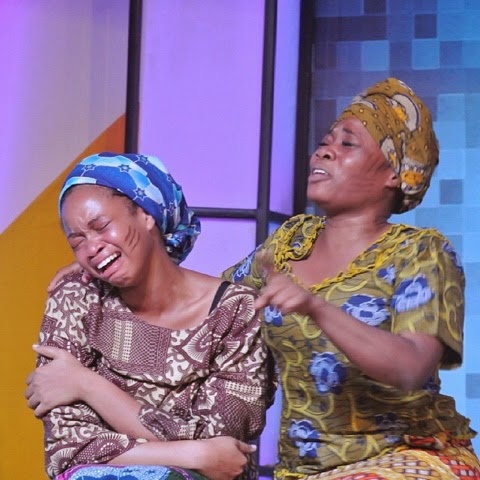 This was sometime last year, my first stage play after the disastrous attempt in secondary school where I turned my back on the audience and began to laugh.
Snapshots is back this year with a major multi-media production titled 'Clogs'. It is a science fiction play about the future Nigeria. A must watch! It will be holding on 29th May, 2015 at the Covenant place, Iganmu (beside national theatre) by 4pm. It is a public holiday, so endeavour to come. And guess what? Admission is FREE!!! 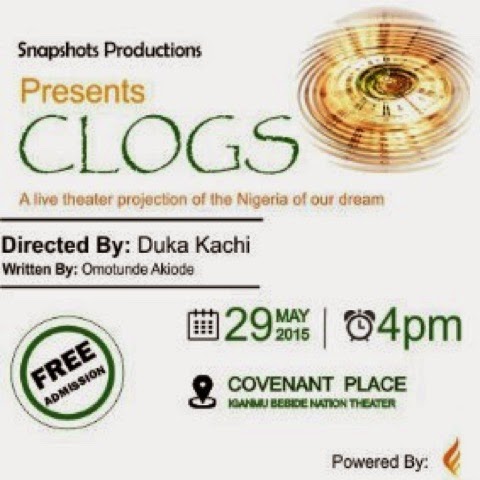 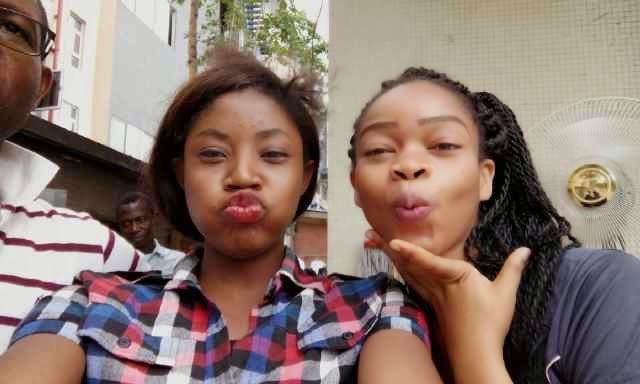 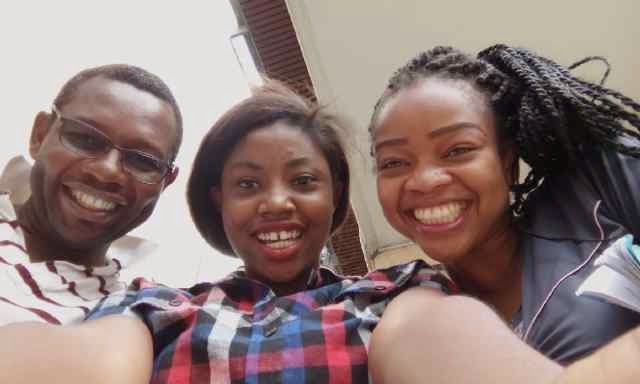 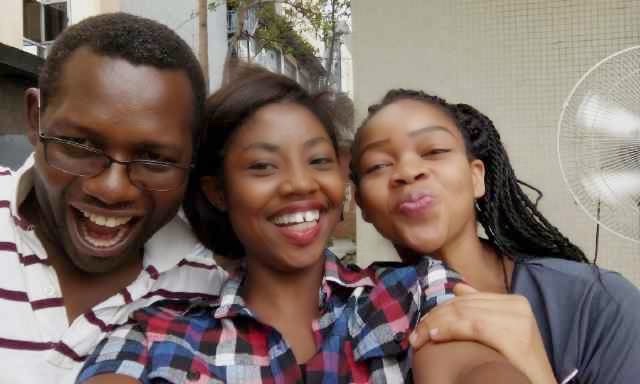 Why Do You Want To Get Married? 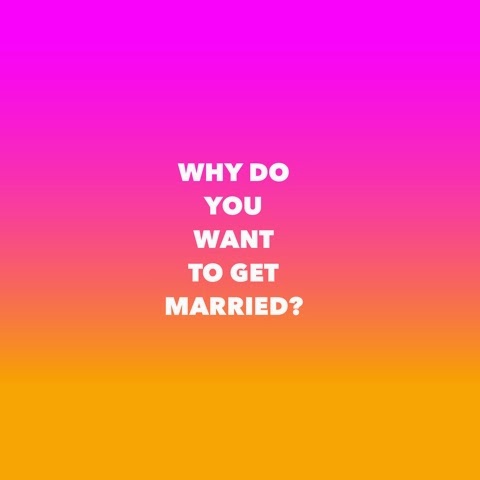 'Why do you want to get married?', he quizzed me.

A thundery silence stole our fairly romantic night as we sat in his car in front of my house. The question tore deep into my soul like a sharp sword would an ice cube. For a moment, I actually didn't know why I wanted to get married. Or rather, I knew, but it was too embarrassing a reason to get married. I mean, if someone else came up with that answer, I'd think she was sick. But as I burrowed into my soul, I knew I had the very same answer. I had never thought about it until then.

'Abuse is inevitable', I said brusquely. He should have known I wasn't comfortable with those questions. He was probing my motives and I felt like I was being stripped naked.

How could I tell him that I want to get married because it is what the society expects of me? I concluded my youth service program the other day and everyone's prayer had a good husband element in it. I'd display a picture with a male friend and pings start pouring, asking if he is 'The One'. I'd call home and the conversation will end with one last issue: Is there anyone on the line?

But I knew I'd be sticking my neck out to make a decision as crucial as marriage based on that reason.

So I decided to find better reasons, cogent reasons. What was the original intent of marriage? I studied the first marriage: between Adam and Eve. I discovered that immediately after God created Adam, he gave him work to do- tend the garden. Then God saw that it wasn't good for him to be alone and he decided to make a helper... Does it mean that the reason his aloneness wasn't good was because of his assignment, not necessarily because he needed someone to talk to (God used to come down in the cool of the evening to have fellowship with Adam). If so, will it be right to say that a man cannot fully accomplish his assignment in life until he gets married? But Jesus didn't get married. Neither did Paul. And they weren't eunuchs, yet they fulfilled their ministries.

So why did Adam need help? And what kind of help did Eve offer? Did she till the ground with him?

What was Eve's assignment? Was it only to be the mother of all living beings? How does that correlate with the role of a woman today? And sure, we know women with great visions in various spheres of the world.

Was she called to only house keeping duties?

The mandate to be fruitful and multiply and fill the earth, subdue it and have dominion was given to both the male and the female and I don't think God was talking just about procreation. Economic productivity must have been included. So if both males and females were given this mandate, I should think that women have their roles in the economic sphere, the political sphere, science and inventions, e.t.c.

Marriage has experienced a lot of abuse because when the purpose of a thing is not known... (fill in the blank). It's just expected that at a certain stage in life one should pick a life partner and raise children. But then there are many divorces these days that have made people start reconsidering the finality in the concept of marriage and start twisting the rules to suit their failure. These are questions people intending to get married should ask themselves and seek answers to from the author of marriage Himself before getting into it, to avoid being an additional data to the divorce statistics.

I recently came across an article that gave me a different view to the purpose of marriage. Here's an excerpt.

The date was May 14th, 2011. It was a Saturday morning and I had such a heavy burden on my heart about not “finding the one” I was at a wedding event the night before and woke up in a really dark place. This was highly unusual because up until that moment, I had zero pressure about getting married.There wasn’t a side comment (about why I wasn’t married) that I didn’t have a smart comeback to.
Not this morning. I had nothing.

So there I was at the side of my bed …on my knees sobbing to God. It all came out…every suppressed frustration, sadness and anger…it all came out. After a while, I stopped crying and just stayed there…and then the best thing happened. I literally heard a voice say to me (Quite matter-of-factly):

On and on it went.  It was like a truck hit me. But it was a hit I gladly took. I just shut up and wrote everything down. It was like a light bulb went off in my heart. Right away, my prayers changed from “who is she….when will she come… is it this one or that one?” to “What is my Marriage Mission Statement?” What should my family look, feel, walk like?  What should my marriage accomplish for the kingdom of God? What should that union do for the kingdom?
The smallest unit in the army is the squad (based on the U.S prototype)…made up of 7-14 soldiers and led by a Sergeant. For men, having a family is like being in charge of a squad within Gods army. But a squad that is not connected to the army is pretty much referred to mercenary. So do you want a squad in Gods army? Or are you looking to be a mercenary leader?
Source: http://ijustmetme.com/2014/07/11-reasons-you-may-not-know-why-single-christian-men-cant-find-their-ruth-esther-or-mary/

I agree with the author. However, I don't have all answers yet. I'm still seeking and if you know, I'd like to hear from you.