"People are suffering o!", my friend exclaimed from the other end of the line.
She had come to Lagos in search of greener pastures and to escape mediocrity. After several attempts at submitting her CV online, she was finally called for two interviews. Packing her bag that Saturday morning, she thought of where to lodge. She had heard Lagos life was expensive, so she ruled out the thought of boarding in a hotel. It was enough that she would cater to her feeding and transportation by careful scraping. She called a distant relative that she knew resided in Lagos. After exchanging pleasantries and beating about the bush to gain some familiarity, she dropped the bombshell. The woman at the other end was in a noisy environment and impatient. She hesitated a little but then said "Mgbe i bia nu" (when you come).

The journey was boring and in fact awful. She sat at the middle row by the window. Her neighbour was a woman who preferred to lap her son throughout the journey, and eventually made him sit in between them after the bus had gone some distance. This was quite discomforting for my friend, but she couldn't object lest she was seen as a Jezebel. The air conditioner was at its highest, yet she felt queasy at the gumming of their skins. A movie was playing but she couldn't hear the sound from where she sat. She had to go through the ordeal of following the subtitle. A restless lady from behind kept stopping the bus at intervals to relieve herself of diarrhoea and the woman in front wound down the glass beside her through which she kept vomiting while the car was in motion. This really nauseated my friend.

At Ore, she asked her relative to send the address to her house. The woman sent it with a clause that she gets home by 10pm and so she might have to wait for her outside till then. My friend then contacted me. By the time I replied her telling her that she could stay two nights with me, she was already on her way to her relative's house.

When she got to the address, she was appalled to see an uncompleted building. No one was around so she had to wait at a corner outside the house. As mosquitoes began to convene, she made a tent outside, luckily she brought a mosquito net. She tied the ends to the window and a wheel barrow. At 10, there was no sign of the woman or her family. At 11pm, they began to trudge in one after the other. Only then did she discover that the woman lived in a one room apartment with her husband and 7 grown children—the last about to write WAEC exams. She was welcomed and asked if she had eaten to which she decently replied that she'd pass. She was hungry, but on scoping the condition of the family, she preferred not to be an additional burden. The room was hot and stuffy. The young adults took their positions on the floor cheek-to-cheek. My friend wondered how the couple could produce so many children in that little space with no privacy. She went back outside to her self-made tent and when she was asked to come in she said she just liked the air outside. 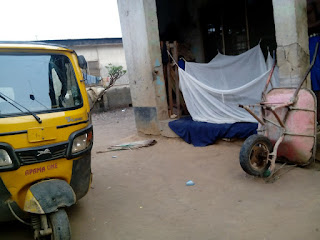 That was how my friend slept under the stars on Saturday night. By the time she woke up, it was already bright and workers were passing by her and staring at the tent. She dismounted her tent got inside the house and was asked what she'd like to eat. "Anything you're eating", she said. To her surprise and dismay, a bowl of cocoa garri was brought out, to which water and sugar were added and the whole family began to munch from it. She had no choice but to join in the feast. Throughout her stay there she just kept on repenting inside her of all the times she had murmured about not having light at night to be able to put on air conditioner to sleep. She was reminded that people still struggle to have basic needs met.

When I called to find out how she was doing, she bursted out, "Chidiogo, people are suffering o".

"My dear, this is Lagos!", was the reply I offered. 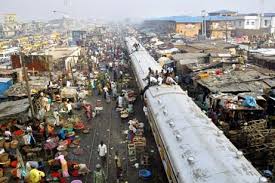 When I first came to Lagos, everywhere I went, I heard it over and over again, "This is Lagos!" I wondered why people felt it necessary to repeat, but then I noticed it was always associated with negative situations. Either my sis was telling me to try not to be on the road at late hours or to try to hold my bag tight while at bus parks, or a friend was narrating the kidnapping of someone, they never failed to stress, "This is Lagos!". Now it was my turn to tell it to my friend. It was like the statement suggested that most people came to Lagos with blue sky ideas of a prosperous and peaceful city. So "this is Lagos" simply means, "Wake up and smell the coffee. Lagos is not the heaven you imagined it to be" Or "Lagos is different from where you're coming from, so drop your former halcyon life and imbibe the fast paced, you-must-be-street-smart Lagos life"

What were/are your own fantasies about Lagos?

True talk about Lag. The government should start thinking on how to decongest the city.

This is sad, but it's a reality of life. "That is Lagos for you".

Haha... I think my aunt has given me that line once! Lagosians are super-citizens of Nigeria!

Lagos is the soul of this country.. Little wonder why having lived in Lagos gives u an edge over most people. Nice work Chidiogo..

Great lessons for everyone.

So I visited Lagos last week.. It's been 7years away.. I just realized that Lagos is still the old Lagos.. d traffic, no light.. sorry, am used to light. Can't sleep without that!!!.. mean, I had to adjust so I won't let my friend feel uncomfortable.. had to cut the vacation short.. I can't survive in Lagos.. una dey try ooo...

Nice piece dear. You just have to be smart to survive in Lagos.

o gal, she neva see anytin! d tin follow her come frm village? well, in Lagos, you find good, bad, ugly, the most beautiful and the worst! with time and chance u make choices. Nice story Chi. r u stil in Lagos?