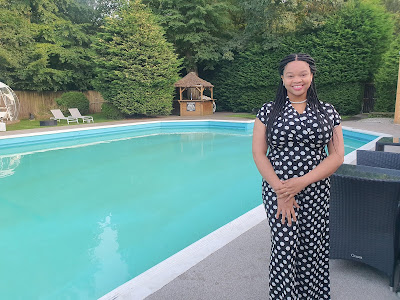 During my maternity leave which coincided with the start of lock down last year, I had time to reflect and take actions on my life. One aspect I thought I needed to work on was my speech.

I prayed about it. My mom would lay hands on me and speak to my tongue daily while she was with us. Up until she left after six months, there was no visible result. I still stammered as bad. During that time, I began listening to Dr. Sunday Adelaja. I discovered that life is governed by rules and success in life is predictable. It can be achieved by anyone willing to study the rules and obey it. So I decided to quit the blame game and take charge of my life.  I wanted to learn about this thing that caused me so much fear, this thing that had held me down, shied me away from reaching my full potentials. (To read about the impact stammering had on my life, click here.)

But the first step to having a problem solved is acknowledging that there is one and finding information already available on the subject. I had to first acknowledge that I stammered and then seek out information on the topic. My journey with stammering had involved lots of denial in the guise of positive confession. I think Christians are particularly at risk of this. In bid to be seen to have faith, sometimes we deny the existence of problems hence do not seek solutions, rather we pray and hope they go away.

I read research papers, listened to TED talks, joined online support groups, attended online conferences where I met fellow stammerers, and read books and blog posts on the subject. I was consumed by it. I needed to know all there was to know. I started learning several concepts including the social model of disability, stammering iceberg, stammering pride. I discovered that "it is okay to stammer" and that I had the responsibility of educating the public to accept this way of speech. Rather than trying to fix me to adapt to the majority, they needed to adapt to this equally valid way of speech. The problem with using advanced speech techniques to formulate a fluent speech pattern was that it only dealt with the tip of the iceberg. Underneath the faked fluency still lay fear, anxiety, feeling of helplessness, lack of control, dissatisfaction for not being able to fully express ourselves the way we want to. The freedom to stammer deals with the bulk of the iceberg.

When I permitted myself to stammer, instead of trying to hide it, I discovered that the fear and anxiety left and so most of the stammer actually left because fear and anxiety had exaggerated it. I no longer feel helpless, hopeless or angry about not being in control of my life and how I want it lived. I have since resumed work after the maternity leave and my work life has completely changed from what it was before I went on leave. I speak fluently, without fear of my speech tripping up on me, I say what I want to say (not having to substitute problem words), I take up teaching opportunties, I meet new people, and I am no longer in dread of the job. I am rather fulfilled. Now I am living free. Free to be myself, free to live out my full potential.

This is my testimony.

I guess the lesson for others is that while we pray, we should also take corresponding action for faith without works is dead (James 2:17). If you are waiting on God for something, pray about it, and also educate yourself regarding the matter. Learn the laws and principles that govern that aspect of life and obey them. The answer to your prayer may just lie in a book, a video or in discussing with someone whose gone through the same. My people perish for lack of knowledge. (Hosea 4:6)

May your deliverance come speedily.

PS: I came across speech therapy. In 2019, I paid a private speech therapist and drove 1hr to keep my 1hr appointments. She taught me several techniques to avoid stammering or minimise the stammer, including breathing exercises and speech techniques. I did not get better with these. I stopped after 5 sessions.

Last year, I engaged with the adult dysfluency service via the National Health Service and by then I had already started accepting the stammer and was now familiar with the stammering iceberg. So I told them I did not want to focus on speech techniques but rather on the negative emotions that accompanied the stammer. So it was more of a talking therapy. I had 3 virtual sessions. It was helpful as it got me looking inwards and reflecting but I had already done most of the work with all my research.

Email ThisBlogThis!Share to TwitterShare to FacebookShare to Pinterest
Labels: Stammering

Brilliant stuff as always! Thanks for the inspiration

Great testimony! You worked out your salvation. Faith + works

Nice read. Great to know that you've overcome the fear.