Boots On The School Ground 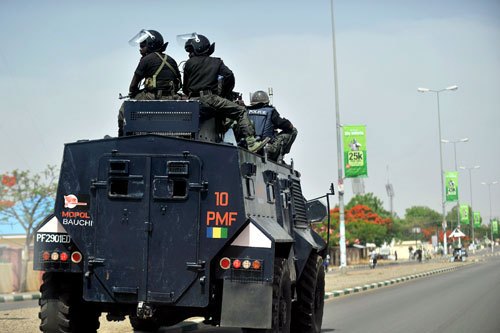 We woke up to terrifying gunshots. I made a beeline for the floor as my mum had once told me, "when there is a shooting, lie flat on the ground". My heart was racing. I could hear it beat. We weren't sure how close they were. What the hell is happening? The shelling went on for ages. Fear and dread were palpable. We quietly climbed back to our beds after some hours of silence and slept half awake till dawn. Everyone hurried out of dorm in the morning to find out what had happened.

Armed robbers had visited the staff quarters. A teacher was shot in the eye. The military had exchanged fire with them, hence the numerous shots we heard over our heads. We were relieved but sad about our teacher. He had been taken to the hospital and we prayed desperately for him. What if the robbers had entered the dormitory? It wouldn't be the first time strangers appeared in our yard. Usually, it would be the peepers who preferred real pornographic scenes to fiction.

That would not be the last time we had boots on the school ground. Well, the next time it was not to defend us. We were being chased out of school with our half packed bags at mid day. The SS3 boys had led a riot the night before to Princi's house over their colleague who was suspended "unjustly". On their way back, probably having not gotten the audience they had hoped for, some decided to make a visual statement by vandalizing the offices in the administration block. That was not the original plan.

The following day, we girls woke up as usual, went to school that morning and quickly found out this was not an ordinary day. First strange thing was that the dining hall was full of girls. Where were all the boys? Apparently, the riot was the beginning of the protest. The SS3 boys had called a lockdown. No male was allowed to leave the hostel. Somehow they still managed to smuggle food into their dorms. We went to our classes and saw the aftermath of the previous night's rampage. Even teachers did not have balls to come to class. One of my class girls decided to be heroic. She wrote on our board, "We are in solidarity with the boys". Little did we know that that simple act of recklessness would list us among the ringleaders of the riot with consequences.

At 12 o'clock an emergency school assembly was called. All students were expected to report to the multi-purpose hall. It was brief. SS3 students including me were handed out suspension letters bearing our names and given thirty minutes to leave the school premises indefinitely. We thought we were still dreaming until we saw military trucks (or so I thought. I later heard they were the mobile Police) in school. Wow! This Princi meant business. Panic mode activated. People were running helter-skelter. We packed the few things we could. Those with illegal phones started making calls. A few of us contacted our school guardian who helped us inform our parents and took us to the car park where five of us got into a bus going East. We split ourselves in two when we got to Enugu and slept in our friends' houses as it was already 10pm. I got home in Onitsha the following day.

We were suspended for two weeks and the school authority demanded a parent to accompany the child on return and for us to sign a memorandum of understanding. I was among the ringleaders given extra two weeks, just for being present in a class of girls deemed in solidarity with the boys' actions. I heard some blokes did not go home and that on the return day, they hired some local men who pretended to be their dads.

For more of my high school posts, click here. Were you ever suspended, caught in the middle of a riot or wrongfully punished in secondary school? What were the circumstances? Please share your comments below.

Email ThisBlogThis!Share to TwitterShare to FacebookShare to Pinterest
Labels: Fedacad, My memoirs

I had at least two "wrongfully punished" experiences in secondary school, both caused by unknown classmates. The first was when someone called our Mathematics teacher "Shanko" - a code word for a short person that could serve as banter among friends but also sound disrespectful to an older person. He was of small stature. He turned to face the class and asked for who said the word, no one owned up. The second was similar. Our Biology was going about her teaching business when someone threw a folded paper from the back of the class in her direction. Again, she asked for who did it but the culprit and others around him kept mute.

On both occasions, we were all led out of the class to kneel down under the scorching sun and on the hot sand downstairs. All the male teachers who were skilled with the use of the cane were summoned. You can guess what happened next. While some students cried, some others rained curses on whoever was responsible for both acts. We served different kinds of punishment for the rest of the day.

@Kingston, that was wicked on the part of the culprits. I wonder why no one gave them away. I’m sure there were witnesses.

Goodness me! My high school experience was very boring compared to this! My husband has also regaled me with similar stories to this. Wow!