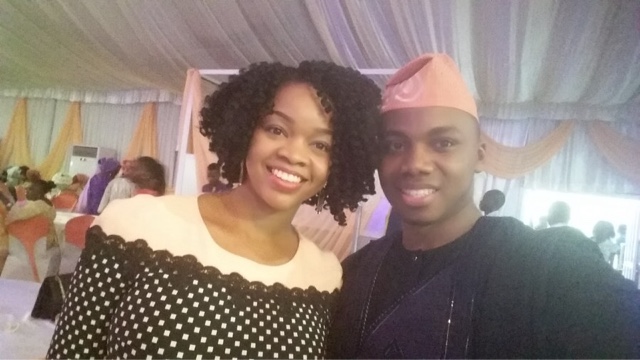 When I was applying for a Masters programme, I had told my then-boyfriend my plan but he was not in support of me going abroad. He wanted me to stay back and find other opportunities locally. On the contrary, Kingston encouraged me, even reviewed and edited my essays. It seemed he wasn't as much concerned about the implication of a long distance relationship if I succeeded; he was more concerned about me furthering my career.

Looking back, it seems God used King's exam to prepare us for the future. I had to learn to tolerate his absence sometimes as he studied. Around mid-year, he left for the UK to write his exams but before boarding, he sent me a song, Wait for me by Johnny Drille. Quite a romantic gesture. I had not heard it before then. I kept playing the song while I waited for his return. He kept in touch regularly. Thankfully he passed. I told him my coming into his life made him pass as he was previously unsuccessful.


Well, I got a scholarship and it was certain I would be away for one year. I was a little disappointed with the news though. I had thought 2016 was my year of marriage, but with the developing events, I would have to wait another year. Besides, how could I survive one full year of being apart from this fine man I had fallen so in love with. I did not doubt his faithfulness. I only doubted my emotional strength to cope. Yet I was excited about the prospects of getting a foreign education, seeing life from a developed world, exploring the public health space and escaping the depression I had from practising clinical medicine in Nigeria.

Before I left for my Masters programme, King made sure I met his parents and he met mine. We wanted both families to be in support of our relationship. I met his mentor. He met mine. So on the 21st of September 2016, I left Nigeria for the University of Nottingham in England, just about 4 months into my relationship with my King.

Awesome. Can two walk together except they agree.Amos 3:3

Am enthralled. Keep it up Radiant!

Wonderful story. I love that song by Johnny Drille too; though I've not sent it to anyone.. Lol.
I pray for you to have a blissful married life Radiant. As King builds this kingdom with you, your home shall radiate God's goodness.

You know I read the entire story from Part 1 to this point and I am so glad I am the MC at your wedding!
I laughed while reading; I saw lessons while reading and most importantly, I see LOVE orchestrated by the Father of Light, who is LOVE Himself.

You both write very well, I must say. I believe your story has strong lessons for the yet-to-be-married, waiting for love and single Christians of our time. I just wish there was a way the story can be published to a larger audience!