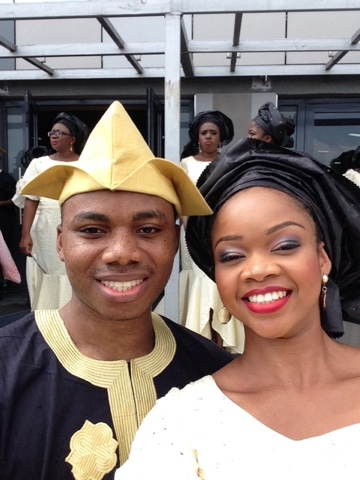 After our meeting at the inductions in July 2015, I left for Ghana for the Young African Leaders Initiative (YALI) programme which lasted 5 weeks. As fate would have it, I received only 2 phone calls from Nigeria.
First, was from my then Chyker, the one of which I had said our relationship was complicated. Yes it was, because I was not attracted to him yet I wanted to get a chance to know him beyond his physical appearance, lest I miss out on God's gift in an uncomely wrapping. Though not Prince Charming, he had a lot of business sense and I learnt a few things from him. Since we had no common platform, we often met over drinks and chips, sharing ideas, trying to know each other better, but I was not comfortable with the idea of a relationship with him partly because he was much older than me. However, his call that day solved my dilemma. I was out late at a YALI business dinner at around 10pm, which was 11pm in Nigeria. As I could not hear him due to the loud music, I asked him to call back later. On getting home I got a stinker text from him, literally calling me a harlot who had gone to Ghana for some runs. That was the end. I began to wonder what I was even doing with someone with such mentality in the first place.
The 2nd call was from Kingston who I was very surprised to hear from, more so surprised at how long our first conversation lasted - over 30mins and the fact that he remembered me all the way from Nigeria. He started by commending me on my contribution to the group project and the discussion gradually moved to questions that would draw out my personality. He knew about the YALI programme, having been involved in community development projects himself, and shared interesting ideas about what he did. That got me thinking that maybe my first impression of him was flawed. I bought him a customized wristband with his name spelled wrongly as "Kingson". Lol. After these events, it became easier to say hellos and his to each other during rehearsals. He also had a way of finding out what I was involved in and bringing a different perspective to make them better. For instance, a lot of his feedback on my blog posts were so constructive that in no time I began to send my write-ups to him before publishing.
One evening as I walked to the bus stop after work, I saw someone wave at me from a car. A few minutes later I got a phone call from him asking what I was doing in his area. I told him I worked in a hospital around there. Whether by divine providence or mere coincidence, Kingston had relocated to Yaba, close to where I worked and eventually lived. I was surprised when he visited me at the hospital on a particular Sunday I had missed church because I was on call. We had not started dating then; we just talked as friends. In fact, I had begun to date someone else, who I had to make a tough decision to leave because I knew the relationship was not right for me. My head knew what was right to do, but my heart was unwilling. I remember about 2 days after I called to break up the relationship, Kingston dropped by. I was still mourning my loss, though I knew I would never go back. I cannot remember what we talked about. I only know that I was speaking in parables trying to say I just had a sad but good break up. He was a good listener.
Then came West Africa Faith Believers Convention (WAFBEC) in Jan/Feb 2016 during which our friendship grew stronger. Kingston graciously offered a group of us lifts from the church after every night of the conference. Occasionally, another friend of his who couldn't leave his office early enough to attend the conference pleaded with him to take his wife, baby and mother-in-law to their house. I noticed that while Kingston excused other members of the crew, he would reserve a seat for me. After the conference, I often rode with him on Sundays since we lived close to each other. I began to really like him as I observed his character - his patience and gentility. Once, a cyclist bashed his side mirror. He didn't as much as get out of the car or shout on the man. Another day, two of his tires got terribly damaged by a sharp object on the road. He was more interested in how to get me home, but I insisted on staying till he had found a safe place to keep the car. I also noticed he was fond of me. Although I fantasized about a relationship, strangely he never brought it up.
Radiant ~ October 2018
That picture was taken during our Asante music concert in November 2015.
Please remember to leave a comment.
Watch out for the next post on him not 'saying anything'.
- October 16, 2018

Awwwww... see me blushing from cheek to cheek @ ‘I noticed he was fond of me’.
Biko thank God for saving you from that elderly verbal abuser who was already feeling he is old enough to talk to you like you are his daughter.
I was going to ask ‘what are your reasons for saying the second relationship isn’t right for you? How were you able to rule him out as you did the first one?
BTW I just finished my whopper meal, wondering if I should order another one or just continue sipping my bottomless/refillable drinks 🤔

Lol. Please order another one but tell them to deliver say on Saturday. Hopefully, by the time it arrives, the next post would have dropped.

The second guy was physically attractive, also met him in church, but when we began to interact I found out we were not reading the same Bible. We had very different ideologies about purity and if I did not run for my life, I wouldn’t be telling this story today.

Radiant, Very lovely and interesting story. Wishing you the very best in your marital Journey. You are such a good writer.

Great, u discovered different ideologies. Many are in church with you but don't believe same thing you believe. Am glad, you picked it earlier

Thank God for the gift of discerning spirit !

Wow! Where have I been since the series started? I'v missed alot! Catch up time. Nice story dear. I wish you both the best of married life.

Exactly! Where have you been? Anyways, the stories are always there for you to catch up on. But better as e dey hot.